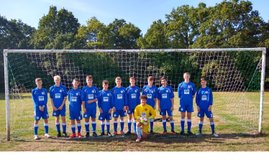 A chilly but sunny morning greeted the Blues return to action after Lockdown 2.0 and the Blues were raring to go after gaining their first win just before the break.
Both teams looked pretty rusty and a very rough pitch didn't help the quality of football. For most of the first half there was little in it, early on Westwood's more direct approach looked more dangerous but as the game wore on the Blues started to exert pressure and won a series of corners but were unable to convert any half chances. The Blues were then punished just before half-time when the ball wasn't cleared and was poked home to give Westwood the lead. This was probably the turning point of the game as the Blues were just beginning to grow in confidence and as soon as this goal went in that confidence vanished.
You could see the lack of self belief in the second half and a mad few minutes resulted in 3 goals to Westwood including one speculative shot from near the half-way line. To the Blues credit they gathered themselves and matched Westwood for the rest of the game going to a 3-4-3 formation. Near the end Archie almost scored a wonder goal as he latched onto a great cross from the right but the bar denied the Blues even that crumb of comfort.
Tough times for the Blues, injuries to Morgan, Brads continued shoulder issues and, at the end of the game Griff having to come off again, makes things hard for this small squad but it was good to see Jay back in action after a long time out.
No outstanding contenders for MoM but Archie's first half efforts and Tomasz determined defensive efforts in the second certainly worth a mention.
Share via
FacebookTwitter
https://www.burghfieldfootball
Recent news