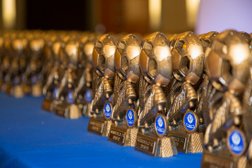 At the end of every season, as well as the individual awards that are presented to each age group, a number of club awards are also presented at our annual presentation day.

Team of the Year: This is presented to a team that have made an outstanding achievement during the year.

Presidents Cup: This is awarded to a team or individual who has made a positive and significant contribution towards the good image of the club.

Sue Bradley Trophy: Sue Bradley died of cancer when her son was a defender in the Burghfield U14s team. Sue was a keen supporter of the side and always ensured that the defenders had their share of the plaudits. This award is presented every year to an outstanding defender from the U14s team.

Peter Gillis Memorial Trophy: Peter died at the age of 30, having been one of the first managers for Burghfield FC. Every year his son Liam, one of his original players, presents this award to somebody who has done something special or outstanding that the club would like to recognise.