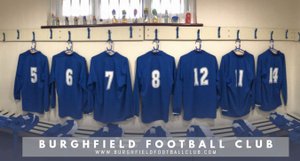 Tournament Rules
​
1. Registration. All players must be within their respective age group by 31.8.2022, i.e. All age groups are as per the current 2021-22 season. Teams must register their team and players 30 minutes before their designated start time by bringing the completed Team Registration Form to the Administration Tent. Team Managers must attend a briefing session 15 minutes before their designated start time that will take place outside the Administration Tent.

3. Equipment. All jewellery must be removed before entering the field of play. Players must wear Shin pads. Trainers, Astro boots and Football boots are allowed. However, the suitability and safety of all equipment is at the discretion of the referee who will judge according to the prevailing conditions. The ball will be Size 3 for U7s to U10s, Size 4 for U11s to U14s and size 5 for all other age groups

4. Colour clash. In the event of a colour clash the team named first will be required to change their shirts, wear them inside out or wear distinguishing bibs. No teams to wear black kits, because of clashing with referees.

5. Starting the Match. The team named first in the schedule will have choice of ends and will provide the match ball. Their opponents will kick-off.

7. Injuries. Whenever it is safe to do so, we ask that injured players requiring minor treatment be substituted immediately to keep the games running to schedule.

8. Substitutions. Roll-on roll-off substitutions are allowed at all age groups, but they can only be made with the referee’s permission and when the ball is dead. The substituted player must leave the field of play before the substitute enters and this should be at the same position on the touchline.

9. Referees. The referee’s decision is final.

10. Goalkeepers. At U7s, U8s and U9s, goalkeepers may fly-kick the ball out of their hands. For all other age groups, the goalkeeper must release the ball by underarm roll out to another player. A goalkeeper cannot roll the ball to himself and then clear with his feet. Infringement of this rule will result in an indirect free kick. Players are allowed in the goal area and the goalkeeper allowed out of the area. Goal kicks are taken from the goal line except at Under 7s and 8s when goal kicks are taken from the edge of the penalty area. Players must be at least 3 metres away from the ball for all free kicks and goal kicks. The goalkeeper is not allowed to pick the ball up, as a result of a deliberate back-pass at any age group. U7s - U10s must retreat to the half way line when goal kicks are taken.

12. Scoring. 3 points for a win, 1 point for a draw. Ties for Quarter Final or Semi Final places will be resolved in order by:
a. goal difference
b. the result of any game between the two teams
c. the most wins
d. the most draws
e. the least goals conceded
f. the flip of a coin by the BFC Tournament Officer

13. Drawn matches. Where Quarter Finals, Semi Finals and Finals matches are Drawn, they will be resolved by the taking of penalty kicks. The team named first in the schedule will shoot first. Each team will take 3 penalties alternately, using 3 different players from the team on the field at the final whistle. If the scores are level teams will continue to take alternate penalties, firstly by the remaining players and then in the same order as before, until one team scores and the other team fails. Only players on the field at the final whistle may take penalties. At any time during the penalty competition the Tournament Officer has the discretion of awarding the match by a toss of a coin. Under 18 & Mens penalties to be only one step. No run up.

16. Penalty Area. The penalty area will be clearly marked.

17. Kick-Offs. Kick-offs can be taken in any direction. A goal may not be scored directly from the kick-off.

18. Throw-In. A Throw-In will be taken if the ball passes over the touchline.

19. Reporting results. The winning team, or in the event of a draw, the team named first in the schedule, is responsible for taking the completed referees result slip immediately to the scorer in the Administration tent.

20. Normal Rules. Except for these provisions, the laws of the Football Association apply.

21. Disputes. Burghfield FC reserve the right to remove from the tournament any team, manager, player or spectator whose conduct is deemed to be unacceptable. In the event of any dispute, the Tournament Officer will have the final decision with no right of appeal. Team managers will be held responsible for any damage caused by their players or supporters.

22. Event Cancellation. If, due to inclement weather, it is felt that the competition should be cancelled, this decision will be made by the tournament committee in conjunction with the referees. We will, however, endeavour to reschedule the Tournament for later date and any Entry Fees paid will be honoured.