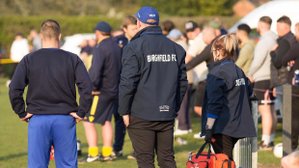 We are pleased to confirm details of both our men’s Saturday and Sunday management teams for the 2022/23 season.

We are pleased to confirm details for both our Saturday and Sunday men's management teams ahead of the new season.

The Saturday set-up remains largely unchanged from last season, with Paul Taplin the only addition to the First Team, joining as player/coach.

Stuart Lee will take charge of our new Saturday A Team, who will be making their debut in Thames Valley Premier League. Stuart was previously part of the Sunday Reserves management team last season.

There are a couple of changes to the Sunday management teams, with Ben Corbett and James Moring taking charge of the Sunday Reserves for the new season, with Matt Heath now taking the Sunday A's.