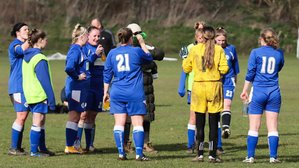 We are delighted to announce the formation of a second women's team ahead of the 2022/23 season.

Following a very successful first season for our Ladies team, we are pleased to confirm a second Burghfield Ladies team will be formed ahead of the 2022/23 season.

The new team will be known as Burghfield Ladies Reserves, and will be competing in Thames Valley Counties Women's Football League (TVCWFL) Development Division in their debut campaign - the same division our existing ladies team were in last season.

The Ladies First Team have been promoted to TVCWFL Division Three South, following a fantastic season that saw us finish runners-up behind Shinfield Rangers Women.

We are delighted to see the continued growth and interest in the ladies game, and the increased number of players that are keen to be involved, allowing us to form the club's second women's team.

More details, including the Ladies Management Teams for the new season, will be announced in due course.