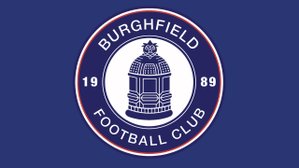 We are delighted to reveal our new club crest that will now be used across all club branding.

Over the past 12 months we have been exploring the idea of designing a new badge that better represents us as a club.

After hearing a wide range of opinions from many of our members, we made the decision to update it, and we are now excited to reveal the new Burghfield Football Club crest.

Club Chairman, Luke Bishop, said: "We're delighted to be revealing our new club badge. This is another step along the way of our rebranding and modernising of the club, after the website was updated two seasons ago.

"From the initial discussions we wanted a badge that represented the village, and choosing the Burghfield Bell - with it's history going back many years - we feel this does just that."

Why are we updating the badge?

Our main reason for updating the badge is to build further on the identity we have already forged within local grassroots football.

Whilst the old badge has been used for many years, it had a feel of being outdated and there is no obvious representation of Burghfield within it. There were also inconsistencies with the versions of crests used, with several different iterations around.

We believe that our new badge, which features Mrs Bland's School Bell, will become more recognisable, and drawing inspiration from the history of Burghfield, better represents our local community.

The typeface is now clean and legible and the numbers 1989, the year we were founded, are now displayed within the badge.

The new badge retains the club’s primary blue colour, along with a small hint of the white and red which also feature on our home kits.

Horatio Bland (1802–1876) was a Canadian merchant and collector of artefacts from around the world.

By the 1840s, Bland had moved to England, where he married Emily Alicia Cherry, the oldest daughter of the Rector of Burghfield, Rev. Henry Curtis Cherry.

In 1861, Horatio commissioned Liverpool architect Walter Scott to design a new red and blue brick gabled house with a slate roof on his land at Burghfield Common. This new home, named Hillfields, is today used as the headquarters of the charity, Guide Dogs for the Blind.

Bland's wife, Emily, died on a trip to Jerusalem in March 1868. In her memory, Horatio founded Mrs Bland’s School at Burghfield Common. The school bell was a large Japanese temple bell dating back to 1746, that Bland had collected on his travels.

The bell became a symbol of the Burghfield community, before it was presented to the Ashmolean Museum in Oxford in 1953.

We would like to say a huge thank you to our Sunday men's player, Joe Mallen, for all of his work over the past few months in designing and creating our new club crest.

Our new badge will be used across all of our social media pages and club branding with immediate effect.

With 42 different teams across all of our age groups, it is not practical to update and rebrand all kit and equipment immediately. We will begin work on updating these from the end of the current 2021/22 season, however this will be a phased process that will take place over the next couple of seasons.