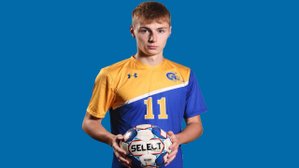 By Burghfield FC
6 days ago
Share via
FacebookTwitter
https://www.burghfieldfootball

Having played for Burghfield from U6’s through to U18’s, former player Ed Port is now continuing his football education in America, having signed for Omaha Mavericks in NCAA Division 1 - the highest level of intercollegiate athletics sanctioned by the National Collegiate Athletic Association (NCAA) in the United States.

After moving to the USA to study in 2018, Ed has represented Genesee Community College in NJCAA (National Junior College Athletic Association). During his 41 appearances over 2 years, Ed scored 30 goals and helped the team reach back-to-back NJCAA National Semi-Finals.

Alongside these records, Ed was also named in the Western New York Athletic Conference (WNYAC) All-Conference First Team, was a part of the WNYAC Champion Team and was named WNYAC Player of the Year in 2019.

Ed has also been recognised by the United States Coaches Association, receiving All-East First Team and All-American First Team honours. He was also named in the 2010-2020 Team of the Decade.

Having received his full scholarship from the University of Nebraska, Ed has now signed his letter of intent to play for Omaha Mavericks, kicking off their NCAA campaign at home against Denver on February 13th.

We are delighted to see the progress that one of our former players has made, and look forward to following what is promising to be a highly successful career for Ed.