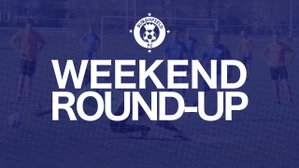 This weekend saw four of our youth sides finish top of their EBFA April mini-leagues, and the good form of our First Team and Reserves continuing.

It has been a very busy schedule for the First Team, who came into this weekend on the back of an unbeaten run of three games in five days. On Saturday we made the journey to Gossmore Lane to face Marlow United, coming away with a 2-1 victory thanks to goals from Teo Atik and a Lewis Butcher penalty.

In TVPL Division Four our Saturday Reserves made it five straight wins and extended their unbeaten start to the season to ten games, with a 4-0 victory over AFC Corinthians at the Rec. First half goals from Billy Margetts and Martin Abery were added to after the break by Adam Bowyer and Jack Matkin.

This was followed up with a 1-1 draw on Monday evening at the Rec against Reading YMCA Rapids, a result that saw us move to the top of the table with a game in hand, as league leaders Reading City Development dropped points. Kieran Smith with our goal in the first half.

A Sunday XI faced a strong Westwood Wanderers side at Linear Park on Sunday morning, suffering a 6-2 defeat. Our goals coming from Adie Pratley and Tom McClellan.

Another Sunday XI visited Pangbourne Rec to take on AFC Pangbourne. Olly Guest gave us the lead from the penalty spot after a foul on Alfie Dell, but the hosts turned it around with a couple of quick goals and held on as we were beaten 2-1.

Our U17 Reds travelled away to Curley Park Rangers Spitfires on Saturday morning, coming out on top 5-4 in a thrilling game in EBFA Group Four.

At the Willink on Saturday our U17 Blues hosted Burnham Junior Panthers Yellows. Trailing by two goals at half-time, the team put in a fantastic effort after the break but despite Archie Elliot pulling a goal back they were unable to find the equaliser. A match report from manager Andy Willis is available here.

Our U16’s secured their first win in EBFA Group 7 as they defeated Wokingham & Emmbrook Warriors 3-2 away on Saturday morning. Luke Mason scored the opening goal before the hosts turned it around to lead with 20 minutes remaining. Angelo Santana-Welch levelled the scores before then converting a penalty in the closing minutes to earn all three points.

Also away on Saturday were our U15 Buffalos, who visited Ascot United Eagles, coming away with a 4-4 draw.

In EBFA Group 6, our U15 Bears defeated Woodley United Rangers 4-1, which was enough to see them finish at the top the table on goal difference from Pangbourne Youth Falcons.

Our U14’s secured a good 3-1 victory at home against AFC Charvil on Saturday morning that was enough to see them claim second place in EBFA Group 10.

A hard-fought encounter at Mortimer West End on Saturday saw our U13 Bisons defeat Woodley Saints Reds 2-1 to secure the top spot in EBFA Group 7. Despite trailing at the break, goals from Kaiyon McKenna and Eddie Riches completed the turnaround and earned all three points.

Our U13 Buffalos were involved in an entertaining away game at Darby Green & Potley Youth Dragons on Saturday that ended in a 5-5 draw. Two goals from Mac Adufo and a James Chaimbault hat-trick helped ensure the points were shared.

It was a good day for our U12 age group on Saturday as both sides topped their EBFA groups. Our U12 Tridents defeated Whitegrove & Warfield Thundercats 4-1 at the Rec as they finished unbeaten in EBFA Group 10.

Our U12 Rangers travelled to Windsor Youth Owls Blues in Group 6, coming away with a 3-2 victory to maintain their 100% record and securing the top spot.

Also in EBFA action on Saturday our U11 Lions travelled to Wokingham & Emmbrook Spurs, our U11 Tigers hosted Windsor Youth Ospreys Reds, our U9 Oranges were away at Winnersh Rangers Jets whilst our U9 Reds and U9 Yellows were both at home against FC Bracknell Bullets and Harts of Bracknell Tornados.

Also in BYDL this weekend our U10s took on Caversham AFC Jaguars and our U8 Reds and U8 Greens faced Twyford Comets Blacks and Maidenhead Boys & Girls Falcons. At Goals our U7 Eagles played FC Woodley Zebras Stripes, our U7 Bluebirds took on Theale Tigers and our U7 Ice faced Centre Skills Diamonds.